The Ballad of Malèna 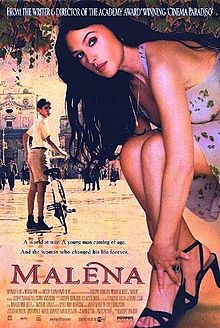 Malèna, they count the lovers you have
Malèna, they say you’re willing and fast
And all the men wish when the dark settles down
To be among those you adore
I climb up the tree just to see you in your gown
Dancing as the firelight falls

Malèna, I still remember when your father died
Malèna, the dirt on the coffin was dry
You’ve never brought flowers you’ve never shown tears
But sometimes your features were pale
Then you settled that villa down at the sea
And you put your father's house for sale

Malèna, they say your love went to war
Malèna, he fell the first day at the front
And finally when your living was at stake
And the devil came into town
You used the best thing God has endowed you with
And you left your ring at home

You’re looking tired, your walk is weak
Still your lips are painted red
Do you feel fine, are you soul-sick
Malèna get out of this mess

Malèna, walking in the shade
Malèna, along the promenade
Then it all fell apart and your dignity got struck
And the mob took its toll
When our eyes met once I wished you good luck
Malèna, you will always be strong

Malèna, you’re walking in the sun
Malèna, adored and accursed at once
You were the brightest light in a young boy’s eyes
And when the young boy became an old man
Many faces showed up and disappeared in my mind
But Malèna you will always stay

We use cookies on our website. Some of them are essential for the operation of the site, while others help us to improve this site and the user experience (tracking cookies). You can decide for yourself whether you want to allow cookies or not. Please note that if you reject them, you may not be able to use all the functionalities of the site.